Malpua with Rabri recipe
It’s Holi today! For those of you who are unfamiliar with the awesomest festival ever invented, here is a little context. Holi is an Indian festival of colors. Basically, on this national holiday, we dress in whites and throw colors at family, friends,  and random strangers–essentially anyone but uniformed officials. We do this while eating all sorts of delicious foods and drinking bhaang (a delicious lassi made with Cannabis!), which is reallllyyy the recipe I want to share today, but I am in Texas…so…. 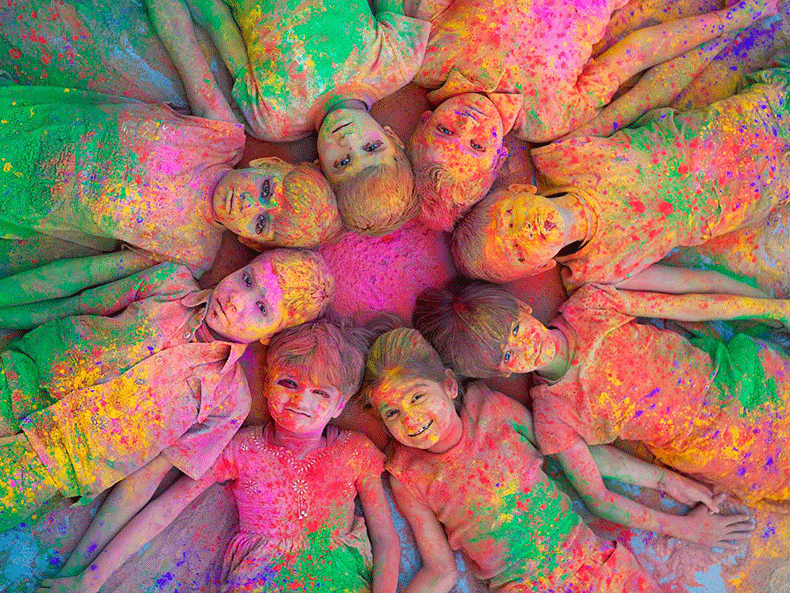 Anyway, going back to the context, there are several stories about the origin of Holi, all rooted in mythologies, but my favorite is the one that involves Radha-Krishna. The story goes that dark skinned lord Krishna (boyfriend) was jealous of Radha’s (girlfriend) fair skin and sulked about it to Yashoda, his mother. One day Yashoda playfully suggested that he should smear whatever color on Radha and paint her skin however he wanted. Fascinated by the idea, Krishna proceeded to do so and thus, introduced the festival of colors. So Holi, literally, is a celebration of love, and harmony, and the blurring of skin colors, and you can see why the whole world needs to start celebrating Holi now! 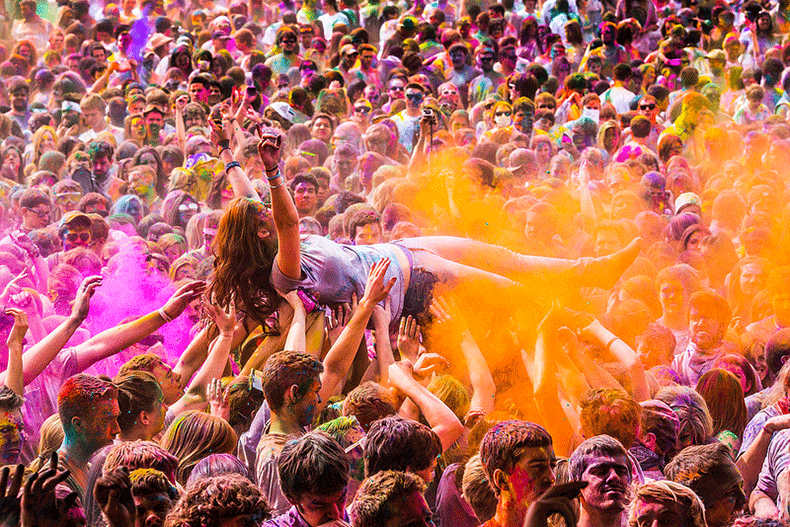 I am going to digress a bit now and talk about the representation of Holi in Bollywood films, because I find the subject fascinating. I was putting together a Bollywood playlist for Holi the other day, and noticed something curious. The depiction of love in Holi songs acquires a unique significance in Bollywood. Holi is no longer a celebration of “pure love”, as was the case with the legendary love birds Radha-Krishna, but in their Bollywood renditions the expression of Holi spirit turns vulgar, promiscuous, even forceful. I am not calling them vulgar because they are “non-traditional”, no, but because they are cases of plain and simple molestation. Holi songs always have intoxicated heroes entranced by the spirit of Holi, unabashedly teasing random women, or their love interests, or married women, or grieving widows, or even elderly women, while the women respond to their tawdry comments with coquettishness. In Kati Patang (1970), Rajesh Khanna sings to a random woman, “Aaj na chodenge bas humjoli, khelenge hum holi/ Chahe bheege teri chunariya, chahe bheege choli” (Whether your blouse gets wet, or your churni, I am not letting you go today, because I want to play Holi with you). In Sholay (1975), Hema Maanini responds to Dharmender’s persistent teasing with “Paas aa k chuna na mujhe/ Chahe mujhe dur se bhigole” (Don’t touch me, but you can color me from a distance if you wish), to which Dharmender replies, “Heere ki kani hai tu?/ mitti se bani hai tu?/ Chune se jo toot jayegi?” (Are you made of mud? Are you so fragile that you will break at my touch?). The famous Amitabh Bacchan song from Silsila (1981) goes, “Rang barse, bheege chunar wali, rang barse” (Color rains, the churni clad woman gets drenched).

In these songs (and more) the female body is framed by the male gaze–the voyeuristic camera handled by the male director, the men on screen who covet her, and the male audience who fantasize about her. The problem here is not only the objectification of the female body, but the justification of that gaze, like a cultural sanction for the aggressive and violent behavior of inebriated men, which apparently is completely natural on Holi. This sentiment is best captured in the same Holi song from Sholay (1975) where Hema Malini says to Dharmender, “Jaa re jaa deewane tu/ Holi ke bahane tu/ Ched na mujhe besharam” (Go away, Holi is only your excuse to tease me), to which Dharmender replies “Pooch le zaamane se/ Aise hi bahane se/ Liye or diye dil jaate hai” (Ask the whole world. It is with such excuses that hearts are exchanged).  But often these playful desires, as documented by other Bollywood movies, lead to the social crime of rape. In Damini (1993), Urmi, a maid-servant is gang raped on Holi by her employer and his friends and is left for dead on the road. The rapists’ defense lawyer, played by Amresh Puri, says “What the boys did is no big crime. Things like this keep on happening”, while the family shames and blames the victim. The implied rationale is that the women, dressed in their traditional white cotton Holi garments, soaking wet in Holi colors, their flying churnis, transparent blouses, incite the drunken men, who are otherwise blameless. But Damini is a film about rape where the aggressors are ultimately imprisoned, so it has a very strong social message. But the real problem is how such crimes against women are often romanticized and celebrated (in Bollywood) in the guise of Holi. For example, look at this scene from Deewana (1992). Here we have a “romantic” Shah Rukh Khan barging in (with a bunch of vicious looking men) on a woman who is still grieving her husband’s murder, and literally telling her “you cannot stop me from loving you”. (Umm…Yes, I can.) But the heroine’s reaction is unnatural. She doesn’t look sufficiently worried; in fact, she seems to be a little impressed. Do you remember if you found this scene problematic? Did we cringe after watching this? If we didn’t, then why? Why?

Thanks for reading my rant. You are being rewarded with a malpua and rabri recipe now, and, also a Holi song that is very close to my heart. Happy Holi, everyone! 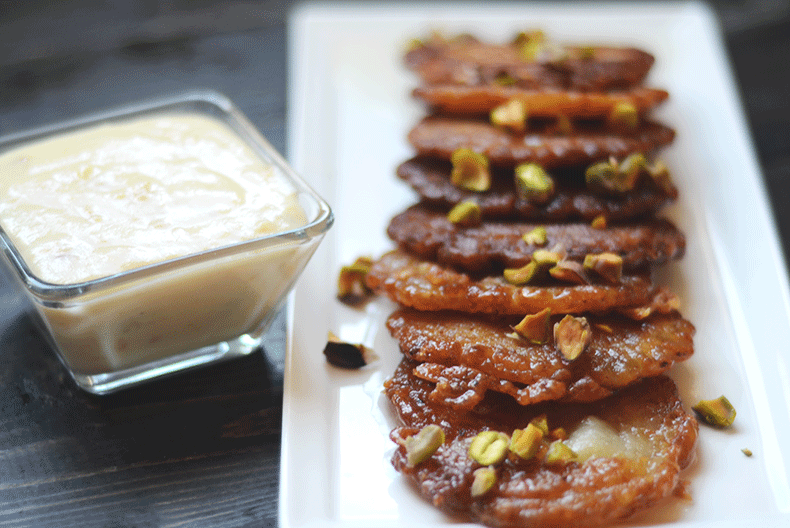 For the sugar syrup
Mix the sugar syrup ingredients in a pan and bring it to a boil. Reduce heat and let it simmer for 7-10 minutes, or until the syrup reaches a thread like consistency. Remove from heat and let cool.
For the malpuas
Mix flour, mewa, water and cardamom powder in a bowl using your hands or a spatula to get a very smooth paste.  You want a pancake-batter like consistency. Use more or less water if necessary.
Heat sufficient oil/ghee in a shallow pan, use a scoop or a ladle to pour the batter on to the center of the pan and fry one pancake at a time. Flip when the edges turn light brown and crisp, about 3 minutes. Fry the other side for 3 more minutes. When done remove from the pan with a slotted spoon and drop into the sugar syrup. Repeat for each pancake. Garnish the malpuas with sliced pistachios and serve with chilled rabri. They are also great by themselves.
For the rabri
Mix milk, cardamom powder, mewa, and condensed milk in a deep pan and bring to a boil. Reduce heat and let it simmer for 8-10 minutes, stirring occasionally. Add the crumbled paneer/ricotta cheese and bring to a boil. Remove from heat and add the saffron strands. Serve chilled with hot malpuas. 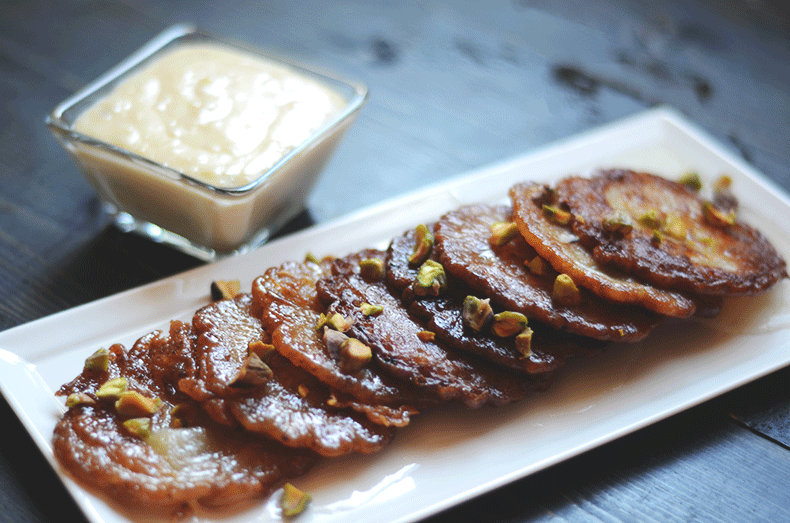 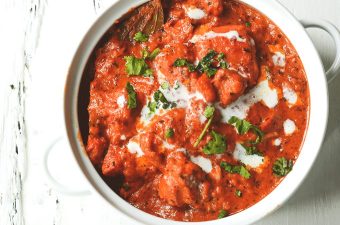 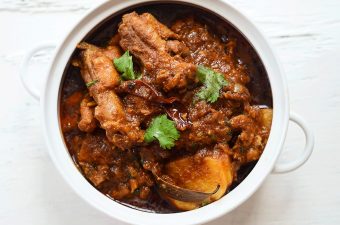 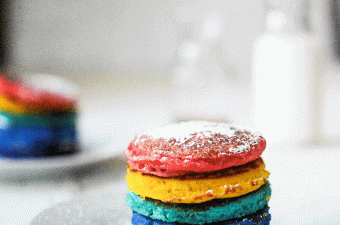 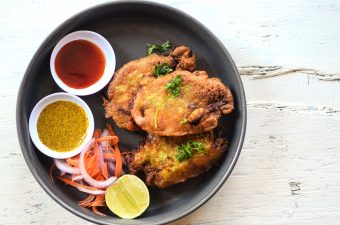 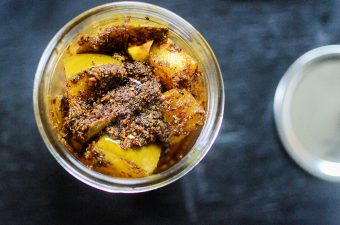 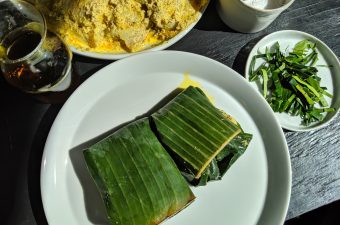 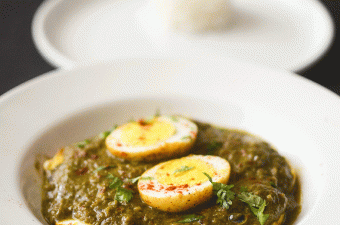 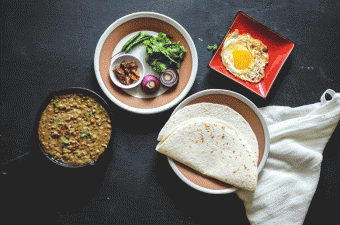 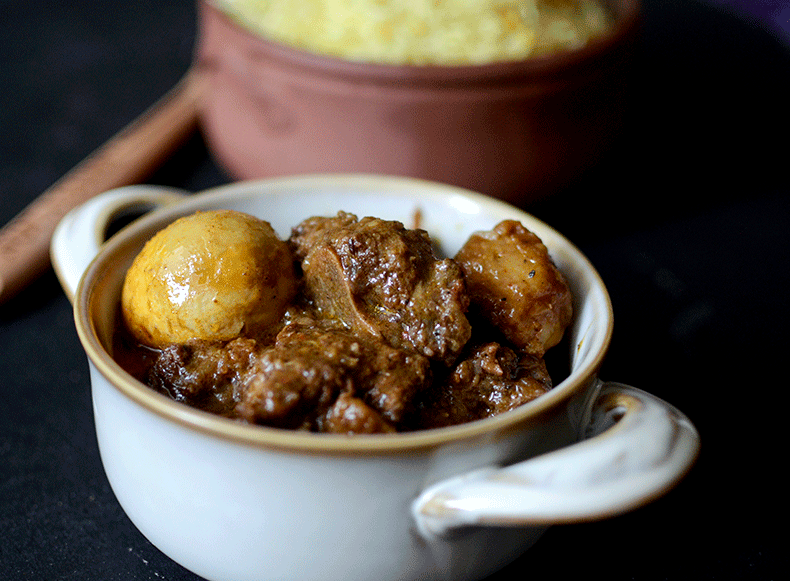 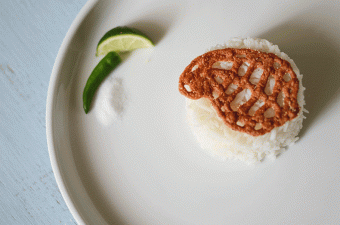